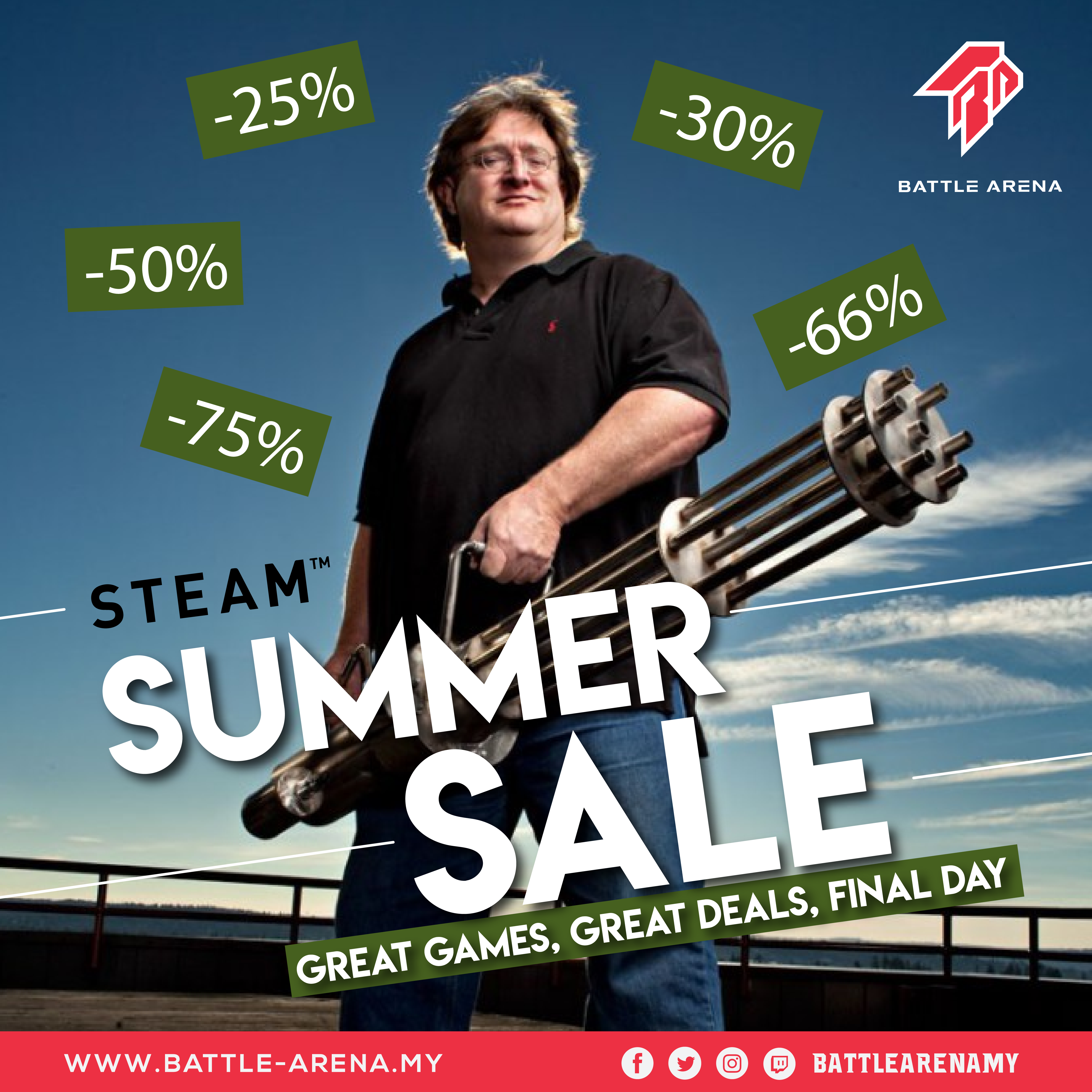 YUP! You read that right! Steam Summer Sale is coming to an end for this year! Better hurry up and pick up those games you have always wanted and saved on those great deals. Since Steam is from the US, there is still time before the end of July 9th, 2019.

Here are some great games that we have picked out if you have no idea what to get.

A stand-alone multiplayer game expansion from the original Don’t Starve game that has made its round as one of the best games ever created. In this game, you are able to band up with your friends and survive in this danger driven world with science and magic. Hitting it off at 60% off, Don’t Starve Together sits at RM12.40 on the steam store. Grab it while the summer sales end in days time!

Not only do you need to manage your basic needs, but you will also need to manage how to survive through the night and your mental health as it plays a big role in keeping you sane.

Danger lurks around and one definitely needs to be wearier during the night.

A turn-based strategy that has evolved through time to meet the needs and skills for players who are either new or veteran to the turn-based strategy game. This game brings the inner tactician in you that you never thought you have. As this game is actually very hard, every decision you make will affect your gameplay. How you deal with every situation and what are the matters more pressing than the other, a mismanage from you will actually cost you to lose the game.

Testing your decision making and the possibility of overcoming a force that is much larger and powerful than yours is part of the game, so if you are looking for a challenge, this game might be a great picked from the summer sales in Steam. More than 75% discount, it only cost RM 47.50 for a full game!

The trailer picking it right off from XCOM ending and continues in this new XCOM 2.

The world of Rivellon is massive and it’s up to you how you want to explore the vast lands, whether it be by yourself or with a party of up to four, you decide. Unlock the secrets of Rivellon and arise to Divinity or succumb to the Void. The choice is yours and yours alone.

Been on the fence about the game? Now’s your time to try it out! The Steam Sale is offering both games at a discounted price! It is definitely worth a buy!

Rainbow Six: Siege a competitive shooter is a perfect game for long-time FPS fans to get into. Siege puts a big emphasis on the tactical portion of the game. The mix between the gunplay and the strategies that you can pull off with the many different operators that have many different abilities makes Siege a unique shooter game as each player and teams have different playstyles, making every game different from the last.

Rainbow Six: Siege is now entering its 4th Year with the release of the new year and season, Phantom Sight, comes 2 new operators, Nokk, an attacking operator that with her “Hel” gadget she becomes invisible to all cameras giving defenders a nice surprise. Warden, a defender from the Secret Service, equipped with Glance Smart glasses he is able to see through smokes and nullifies the effect of Stun Grenades, making the attackers think twice about rushing in with Stun Grenades. A rework of an old classic map Kafe Dostoyevsky, adding one more site and changing the interior to make the map more balanced for both the attackers and the defenders.

Currently, from 2nd July – 16th July 2019, there is a special event happening in Rainbow Six: Siege called Showdown! Play as The Law or The Gravel Top Gang, in the special 3v3 map, The Truth and unlock special limited-timed skins, if you’re looking to get into the game, now would be the time to get into it with this special event!

The game is currently on sale on Steam going for as low as RM35! Why wait to give it a try?

From the creators of Bastions and Transistor comes Pyre, a game where you as the player (Reader) will lead a band of exiles to freedom through a series of mystical competitions known as the trials.

Pyre’s gameplay is simplistic yet challenging once you as the player dive deeper into the little nuances which will earn or cost your exiles their freedom.

In my personal take, Supergiant has yet done it again with their consistency in amazing soundtracks, graphics and gameplay. For a measly RM15.60, Pyre is an excellent choice if you are looking for a novel like game where your choices will impact the world within Pyre.

Set in a dystopian region, Papers Please is a game where you play as a border officer scrutinizing people as they try to enter the fictional state of Arstozka.

The graphics some say lacking, but in my opinion, is a great fit to the theme of the game. Easy to understand gameplay which puts you in a similar position of working a job but yet fun and challenging!

Going at RM11.50 during the steam summer sale. Push the boundaries of the moral limits and see how you will fair siding with terrorist or following every rule to the book. Glory to Arstozka!